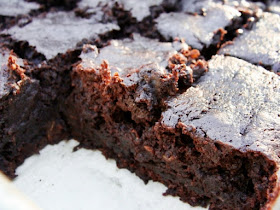 This was definitely Brownie Day for me!  I posted three past brownie recipes from this blog on Facebook today (Peanut Butter Swirl Brownies, Chai-Almond Brownies with Double Ginger Gelato, and my Almost No-Fat Brownies), and a new post here on this blog with a recipe for S'more Brownies that I had previously developed for my now-defunct newsletter.  But I just had to make some, even though DH and I are on Weight Watchers again.  So, I decided to test out an idea I'd been thinking about for quite a while.  If it turned out, we'd taste-test a couple each and freeze the rest for our company who will be here over the holidays.

Those of you who read my blog may have read the entry about the black beans and brownie mix recipe that I tried from the Internet. I followed the directions and used canned black beans and their juice. The texture wasn't bad, but it tasted so "bean-y". But not "nice bean- was determined to make my own version, though, because it intrigued me to use black beans as part of the fat and instead of the eggs in a brownie. My omni friends had no idea there were beans in these brownies, and gobbled them up!  But they were quite rich for my style of cooking and I wanted to test out a fat-free version of the black bean brownies as well as for the okara brownie variation that I had also developed from that recipe.

So, below is the result of today's labors, the vegan butter replaced with applesauce to eliminate the fat (except in any nuts you care to add), and the method streamlined.  Another blogger had tried my original recipe but had forgotten to add the vegan butter-- but they still rated high with her and her tasters, so, I was confident that they would be acceptable without the fat.  But I was nervous that just leaving out the vegan butter would result in a dry brownie, so when I made them today I used a thick, smooth, unsweetened organic applesauce in place of the vegan butter, in both the black bean brownies and in the okara variation (yes, I made both!).  They both turned out to be amazingly rich-tasting and moist, without having that raw, over-gooey texture that I dislike. (And the nutrition stats are pretty good, too! In my original recipe, I cut it into 20 squares and the plain, no-options-added brownie contained 195 calories and almost 10 g fat. With the new recipe, you can cut it into 16 larger squares and each one [no nuts]contains only 159 calories and about 1.5 g fat.)

You will notice that there is only 1/2 cup flour to 1 1/4 cups cocoa powder-- this is one reason that the brownies are so chocolate-y despite containing no solid chocolate.  Also, you will notice that I bake the brownies at a low temperature (300°F) for fairly long time compared to other brownie recipes. This ensures the proper fudgy-ness without what I consider that distasteful raw texture and taste.

I'm going to use this version from now on-- who needs the fat?  A bonus-- I have goodies for my company in the freezer! 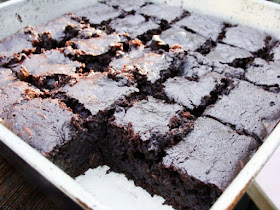 FLAXSEED AND EGG REPLACER "GLOP":
1/2 cup    water
2 tablespoons    flaxseed, ground into a fine meal, almost a powder, in an electric coffee/spice grinder  or dry high-speed blender
2 tablespoons    Ener-G or Orgran No Egg egg replacer powder
ADDITIONAL INGREDIENTS:
1 cup    home cooked black beans (or well-rinsed canned ones), mixed with about 3 tablespoons water or home-cooked (NOT canned) bean liquid
1 cup    light organic unbleached granulated sugar
1 cup    packed brown sugar
1/2 cup    smooth unsweetened applesauce
2 teaspoons    pure vanilla extract
DRY MIX:
1 1/4 cups    organic unsweetened cocoa (yes, really... that much! (I use Dutch-process-- read about cocoa powders here)
1/2 cup    wholewheat or unbleached flour , OR use a GF flour mix
1/2 teaspoon    salt
1/2 teaspoon    baking powder
OPTIONAL ADDITION:
1/2 to 1 cup    chopped walnuts or other favorite nuts
Preheat the oven to 300°F. (Yes, trust me-- only 300°F! See  note about this in text above.) Spray a 9-inch square pan with oil from a punp sprayer and line the bottom with baking parchment cut to fit, with the parchment going up 2 opposing sides to the rim of the pan. This allows you to lift the cooled brownie, uncut, out of the pan with no muss or fuss, if you wish.

Combine the water and ground flax seeds in a bowl and let them soak while you assemble the other ingredients. Place the soaked mixture into your food processor and process until the mixture is gloppy, somewhat like egg whites. Add the egg replacer and beat until thick and foamy.

Add the Additional Ingredients and process until smooth. (You may see some flecks of beans skins-- nothing to worry about.)

Combine the Dry Mix ingredients in a medium bowl. Pour in the mixture from the food processor and fold and stir briefly, just to blend. Fold in the nuts, if using.

Scrape the batter into the prepared pan and bake for 50 minutes. Check for doneness with a cake tester or toothpick, it may be a but sticky, but you should not see raw batter.  My goal was to make a moist, fudgy brownie, but with no “raw batter” texture and mouthfeel. When it's done, remove the pan to a cake rack to cool.  IMPORTANT NOTE: Ovens can vary, pans can conduct heat differently, so test at 40 minutes.  If you happen to use a smaller pan, say an 8-inch square one, which will make a thicker brownie, you may have to cook for as long as 65 minutes.

Do not cut until the brownies are cool. You can lift the whole thing out of the pan onto a cutting board, using the parchment liner, if you like, or just cut them in the pan. Use a very sharp knife to cut into 16 squares. 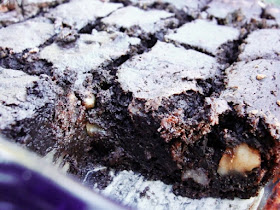 BRYANNA’S REALLY GOOD (ALMOST-FAT-FREE) DARK, FUDGY VEGAN OKARA BROWNIES (Can be GF)
Yield: 16 brownies
Follow the recipe exactly as above, but omit the black beans and their liquid and use instead:
3/4 cup packed, well-squeezed okara (soybean pulp from making soymilk or tofu)-- do NOT use very wet okara, please.
+ 1/4 cup water